The Dantherm Arena. From Post-It Notes to Hockey Pucks. 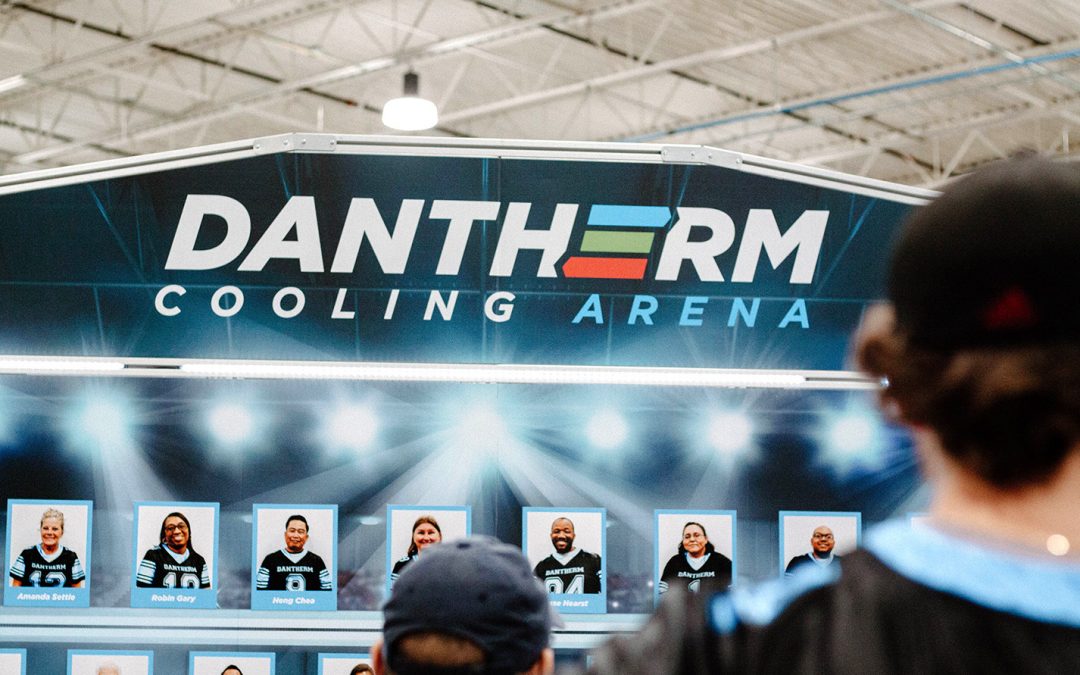 Production Manager Kevin Lanford began his career at Dantherm Cooling in 2018. In addition to overseeing normal daily production activities, he was charged with using his Lean Manufacturing training to redirect the company’s culture. Dantherm Cooling was ripe for adopting Lean methods, but beginning a Lean journey is never an easy task, and the situation at Dantherm was no different.

Despite success within this system—after all, Dantherm Cooling has been around since 1996—there were also broken lines of communication and inefficiencies throughout the company. It was Kevin’s duty to make the necessary repairs and teach his new colleagues that there was an easier way to work.

He quickly recognized that Dantherm Cooling had a production floor full of dedicated, hard-working, and experienced employees who would love the opportunity to be involved in the decisions that affect their work. For Kevin, it was time to remove the walls, tear down the silos, and begin working together toward a common goal, which at that time was simply to keep Dantherm Cooling alive.

Kevin knew a way to bring everyone together and build a team—the Dantherm Cooling Team. As he tells it, “I was itching to use a new technique I had been introduced to, and this was that opportunity. Now or never, it was time for Personal Kanban!”

Personal Kanban is a technique created by Jim Benson and Tonianne DeMaria Barry, the authors of Personal Kanban: Mapping Work/Navigating Life, which won the Shingo Prize for Operational Excellence Research Award. Kevin was introduced to this technique in 2016, at the Lean Enterprise Institute’s annual conference. During a 90-minute breakout session with Jim Benson himself, Kevin’s eyes were opened.

“Jim’s take on visualizing work, limiting WIP, and the overall psychology of work fascinated me. I began using this technique in my daily work, I trained others on this technique at a previous employer, and I was even influenced enough to use it at home with my family, which was a real game-changer (even though my wife initially protested: ‘Don’t try that Lean stuff on me!’).”

Kevin set about adapting this technique into a manufacturing tool at Dantherm Cooling, and began figuring out how to get Dantherm’s brain-trust to adopt this new tool into daily work. His first action was to move the location of the company’s daily production meeting to the “Gemba”: the production floor. “I wanted everyone to see the leadership team working,” says Kevin, “No longer would there be an ‘us and them’; only a ‘we’.”

Suddenly, production associates were listening in on the conversation, and they began offering suggestions. On several occasions, they even corrected inaccurate information, which was an awesome change in attitude. Once Kevin got the production associates involved as active participants, he came up with an idea to get everyone else reading from the same sheet of music: “We must make our work visual!” 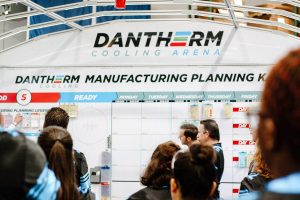 It started with little pieces of paper on a wall. “We began filling out Post-It Notes with basic information,” Kevin recalls, “The projects we were building, the quantity of products, the due dates, customer information, stuff like that.”

Over time, the system began to evolve. As Kevin remembers: “From Post-It Notes, we transitioned to handwritten notecards on magnets on a 6-foot white board. Then the white board grew to two white boards. The handwritten notes were eventually replaced by printed notecards with an incredible amount of important information used by all departments. Visibility on pending projects increased from one week to two weeks. Not only could we see what we’re doing right now and the rest of this week, we could see what we’re doing next week, as well.”

For Kevin, the best part is that all these positive changes originated out of employee feedback. “We are now operating in a Kaizen culture,” says Kevin, “Ideas and daily execution of work is becoming bottom-up rather than top-down.”

Today, Dantherm Cooling’s production floor—and the company as a whole—runs like a first-class operation. But Kevin knew more was needed. “Our systems and tools are ‘first-class,’ but that’s not the vision; ‘world-class’ is the vision.”

Kevin knew that Dantherm needed a media that conveyed the vision in an unmistakable manner, one that is employee-centric. But he also understood that you can’t be employee-centric without being in the center of the employees. His ultimate vision for this Manufacturing Planning Kanban tool was to display it in a communications hub, accessible by all departments and all employees. He just had to convince his leadership.

“Greg Kaye, President of Dantherm Cooling, has always been an open-minded recipient of ideas,” says Kevin, “This was just par for the course.”

Kevin mapped out his communications hub idea, and the pair discussed how the Kanban board had become a major part of the everyday life of the company. Greg’s creative juices began to flow and his marketing experience kicked into gear.

“As we discussed what building a communications hub would look like for Dantherm Cooling,” recalls Greg, “I became excited about the prospect, but I wanted a theme that spoke to the heart of Dantherm. Our communications hub needed to be about more than just what we do and how we do it; I wanted it to be about who we are. I ended up working out a theme that utilized some synergy that already existed within the company.” 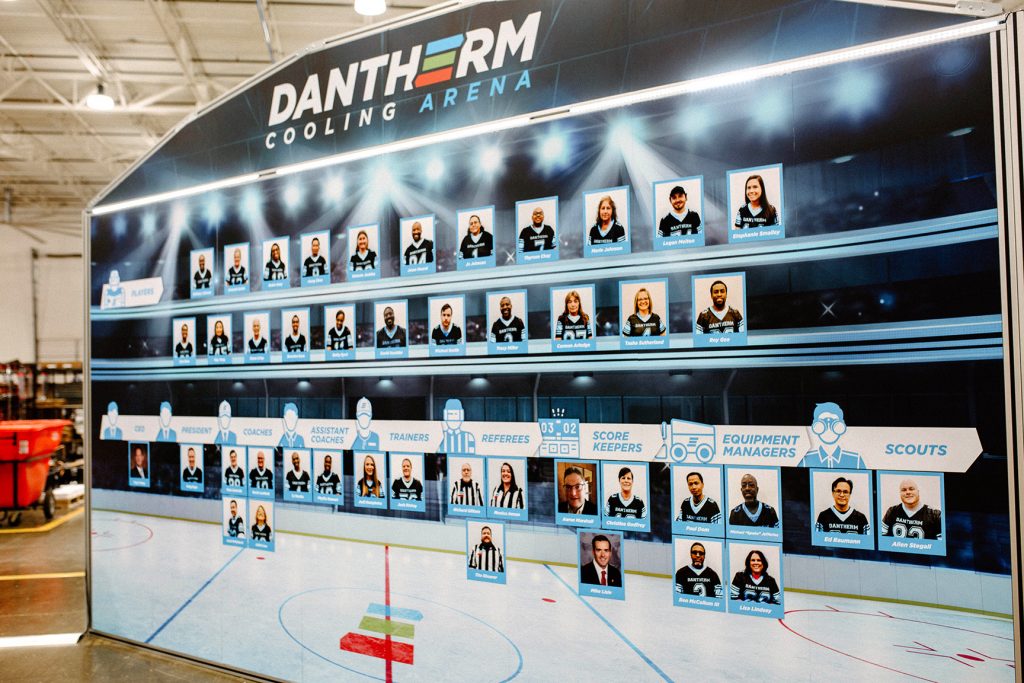 For example, the engineering team at Dantherm Cooling has a mantra: “You can’t leave until you make ice.” So, the company created “Do not disturb” signs for employees who need dedicated time to focus on vital tasks—aptly named “Ice Time.”They decided on a hockey rink design for the placards to show who was working on which function. As Greg recalls, “Going with that theme, I pitched the Hockey Arena idea and the concepts we could cover to Rick Schmidt, our CTO. Rick went into Solid Works and drafted the first mockup of the arena. Together, we laid out how the team would be displayed with our philosophy of leadership from the ground up. We figured out how we could use the design to not only recognize team members for their role, but also express gratitude for their dedication to the team. We worked out how we could show appreciation to our customers and vendors as well. It’s all about the people who work here and the people they serve. That connects to our heart. We wanted to live that out on the production floor.” 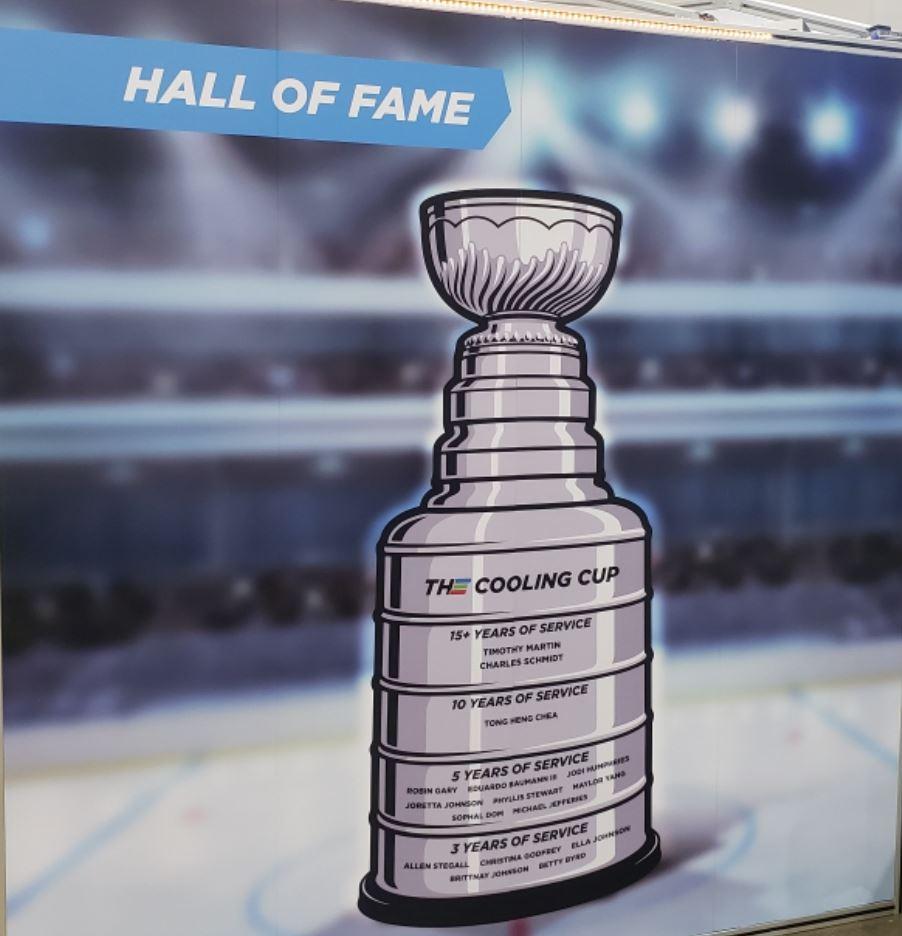 The arena design now incorporates all of Kevin’s great ideas rooted in Lean Manufacturing methods, which he has greatly expanded to include critical KPIs and Quality. The concept has moved throughout the production facility to include Dantherm’s new water test station (dubbed “The Icebox”) and a NEMA4 test station (now called “The Icehouse.”)

A mezzanine overlooking the floor now includes a skybox deck that provides a great view of all the action in the warehouse and production lines. The lab space is now called “The Cooler” and the breakroom is affectionately referred to as “The Bench”—a place for the staff to relax. The production team even got “sweaters” (hockey jerseys), and the company awarded plaques with photos to all the of the teammates who are on the trophy and have worked at Dantherm Cooling for three or more years.

As Greg Kaye sums it up, “The Dantherm Arena is a celebration of our team, our customers, our suppliers, our quality, our accountability, and our innovation. It is designed with servant leadership in mind, which exists throughout our organization. Dantherm Cooling is truly cooling from a different perspective.”